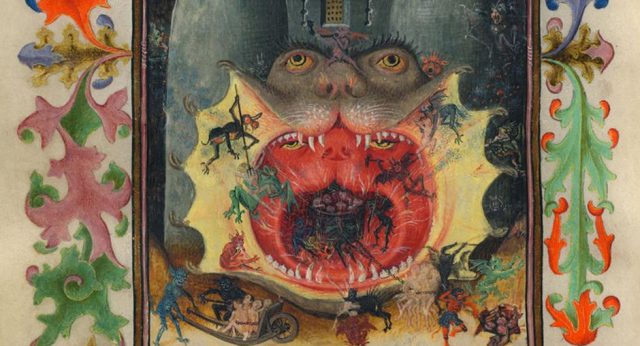 “I think hell’s a fable,” the famous professor proclaimed—a surprising declaration not only because it was made in the late sixteenth century, when very few people would have dared to say such a thing, but also because he was at that moment in conversation with a devil to whom he was offering to sell his soul. The professor in question was Doctor Faustus in Christopher Marlowe’s great Elizabethan tragedy. Bored with his mastery of philosophy, medicine, and law, Faustus longs for forbidden knowledge. “Where are you damned?” he asks Mephastophilis, the devil whom he has conjured up. “In hell,” comes the prompt reply, but Faustus remains skeptical: “How comes it then that thou art out of hell?” The devil’s answer is quietly devastating: “Why this is hell, nor am I out of it.”

Did Marlowe, a notorious freethinker who declared (according to a police report) that “the first beginning of Religioun was only to keep men in awe,” actually believe in the literal existence of hell? Did he imagine that humans would pay for their misdeeds (or be rewarded for their virtues) in the afterlife? Did he think that there was a vast underground realm to which the souls of sinners were hauled off to suffer eternal punishments meted out by fiends? It is difficult to say, but it is clear that hell was good for the theater business in his time, as exorcism has been good for the film industry in our own. In his diary, the Elizabethan entrepreneur Philip Henslowe inventoried the props that were in storage in the Rose Theater. They included one rock, one cage, one tomb, and one hellmouth, the latter perfect for receiving a sinner like Faustus at the end of act 5.

There is evidence that Marlowe’s play produced a powerful effect on his contemporaries. During a performance at the Theatre—London’s first freestanding wooden playhouse—a cracking sound caused a panic in the audience; in the town of Exeter the players bolted when they thought that there was one devil too many on stage; and multiple rumors circulated of “the visible apparition of the Devill” unexpectedly surging up during the conjuring scene. In Doctor Faustus, hell may have been a form of theatrical entertainment; audiences paid their pennies to enter a fictional world. But when the performance was disrupted by a surprise noise, the crowd was prepared instantly to jettison the idea of fiction and grant that it was all too true. This is a familiar story. We humans have a way of turning our wildest imaginations into unquestionable beliefs, the foundations on which we construct some of our most elaborate and enduring institutions. In matters of faith, the boundary between make-believe and reality is porous.

The Penguin Book of Hell, edited by the Fordham history professor Scott Bruce, is an anthology of sadistic fantasies that for millions of people over many centuries laid a claim to sober truth. Not all people in all cultures have embraced such fantasies. Though the ancient Egyptians were obsessively focused on the afterlife, it was not suffering in the Kingdom of the Dead that most frightened them but rather ceasing altogether to exist. At the other extreme, in ancient Greece the Epicureans positively welcomed the idea that when it was over it was over: after death, the atoms that make up body and soul simply come apart, and there is nothing further either to fear or to crave. Epicurus was not alone in thinking that ethical behavior should not have to depend on threats and promises: Aristotle’s great Nicomachean Ethics investigates the sources of moral virtue, happiness, and justice without for a moment invoking the support of postmortem punishments or rewards.

2 thoughts on “Damn It All”