From Trademark and Copyright Law:

Like any other magazine publisher, “Nat Geo” (as they like to call themselves these days) encounters a wide range of IP issues.  I was particularly interested in the one arising from Nat Geo’s recent magazine cover featuring a partially submerged iceberg, which upon closer inspection was revealed to be a discarded plastic grocery bag.

The image was accompanied by the text: “PLANET OR PLASTIC?  18 billion pounds of plastic ends up in the ocean each year.  And that’s just the tip of the iceberg.”

An artist named Matus Bence came forward and tweeted at Wallace: “thats [sic] sad that you chose a stolen idea and ‘artwork’ to be on your cover page. NatGeo should know better.”  Bence’s tweet featured a photographof another plastic bag in the ocean, which he apparently created in 2015 to help advertise Tesco’s reusable bags. 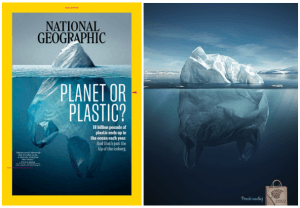 This exchange set off a controversy, with people weighing in on all sides. To complicate matters further, some other iceberg/plastic bag pictures came out of the woodwork.

The depiction of a plastic bag littering a pristine ocean, initially appearing to be a beautiful iceberg, is unquestionably a powerful and provocative image.  So does the first artist to stage and capture such an image have legal rights to prevent others from doing so?  Not necessarily.

Copyright law does not protect ideas, but rather the original and creative expressions of ideas.  Copyright infringement also requires actual copying, which may be proven by showing that the works are substantially similar and that the accused infringer had access to the copyrighted work (because, for example, it was publicly available on a website).  In determining whether works are substantially similar, courts consider whether there are limited ways to express the same idea, whether the similar elements are commonly used in works of that type, and other factors.  A claim of copyright infringement may be defeated by showing that the accused infringer independently created the work in question.

Link to the rest at Trademark and Copyright Law