New year, new resolutions, new approach to life! Now might seem like the perfect time for some life-changing magic, and perhaps the time to begin with some tidying up. Maybe even using the Konmari method that everyone seems to be talking about lately.

Marie Kondo’s ‘Konmari’ approach to tidying up has taken the world by storm, with the book The Life-Changing Magic of Tidying Up published in English in 2014 (it was originally published in Japanese in 2011). A sequel, Spark Joy, was published in 2016, a graphic novel version, The Life-Changing Manga of Tidying Up, released in 2017, and a new series on Netflix, Tidying Up with Marie Kondo, began airing in 2019. The main premise of her approach is to discard everything that does not spark joy and you will eventually surround yourself with only things that you love.

I love the idea, and when I read The Life-Changing Magic of Tidying Up and the graphic novel version of the book, I was inspired to think about what my life and home would look like if I adopted the Konmari method. But there were some elements to her method that I disagreed with, particularly the ones related to books — actually, in retrospect, only the ones related to books. I think I could adopt her approach in every other part of my life. Probably.

What is it about books that I disagree with? Kondo suggests that the books that you keep to be read eventually will actually never be read, and that the moment you first encounter a book is the moment to read it. If you don’t read it then, you are not going to, so it can be discarded.

She also argues that you are going to reread very few of the books, and you don’t need to keep the physical object after you’ve read it once; the experience of reading the book will stay with you even if you don’t remember everything in the book. You have experienced reading it, the book is a part of you, the physical object has fulfilled its purpose and therefore can be discarded.

The criterion for whether or not to keep a book using the Konmari method is whether or not you experience a thrill of pleasure when you touch it — whether the book sparks joy.

But for me, there are two parts of this that do not work. Her premise that if you don’t read a book when you first encounter it then it has lost its moment and you will never read it is wrong for me. And you know what book most clearly exemplifies this? The Life-Changing Magic of Tidying Up. Yes, the very book about this approach. I find that quite amusing, actually. I bought the book in mid-2016. I had just moved to America, and my husband and I were trying to fit everything I had brought with me into his already-established apartment, and I thought the book might help. I read a chapter, then closed the book and didn’t finish it. You might think that the book lost its moment.

The second part of her approach to books that doesn’t work for me is her argument that you will not reread. Because I do reread. Maybe not often, and maybe not every single book I own will be reread (and those are ones that I *would* be willing to part with), but I reread enough of my books that this criterion doesn’t work.

Link to the rest at BookRiot

Let us start with the premise that PG is not the tidying up type, at least in the manner envisioned by Ms. Kondo.

As he analyzed his tidying or anti-tidying behaviors, he realized that at Casa PG, he unconsciously divides the interior space into common areas and private areas AKA lairs.

The common areas represent spaces where visitors are likely to exist and PG is more prone to tidying behavior around locations like the front door, the living room, spaces a visitor might be able to peer into from the living room, etc.

At the other end of the spectrum, the best example of a lair is PG’s office.

In order to enter PG’s office, a visitor would have to go through the living room, move to a different level of Casa PG and beat PG to the door of his office before he closed it. There is even a lair lock on the door.

As PG performed a tidiness assessment, he realized there are varying zones of tidiness represented in his office. In that respect, PG’s lair represents a creation akin to the layers of an ocean. 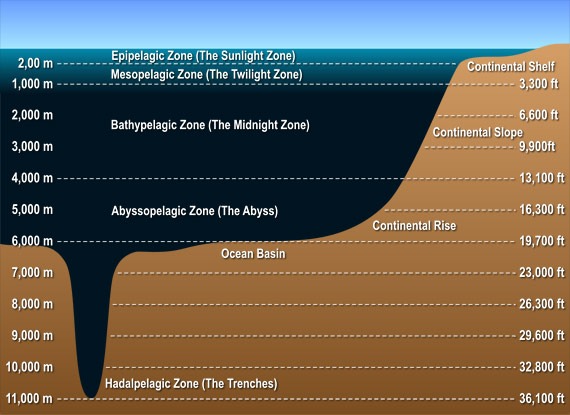 The entry to PG’s office is equivalent to Epipelagic or Sunlight Zone.

As one continues horizontally into the office, one passes through the Bathypelagic (Twilight) Zone and Abyssopelagic Zone (The Abyss). Finally, when the office diver reaches PG’s desk, he/she is fully-immersed in the Hadalpelagic Zone (The Trenches).

As he considered the potential impact of a tidying-up event on his office, PG realized that it would create an ecological disaster of immense proportions.

Should PG conduct a scientific audit of the microbiologic residents of his office, he is certain the results would demonstrate that the life forms which flourish in the Sunlight Zone differ substantially from those in The Trenches. Tidying up this exquisitely balanced little world would undoubtedly trigger a microbial mass extinction.

PG has no desire to be held up as an example of the worst sort of the speciesism which is already too prevalent in our society.

As a responsible steward of his office environment, PG hereby pledges to allow life in all its kaleidoscopic beauty to continue to live undisturbed and evolve in peace.