Some authors and publishers have created fashionable swag from the cover’s design elements or the novel’s plot. Book bloggers, influencers, and readers are often excited to show off these items on social media, creating a unique opportunity for word-of-mouth buzz.`

The cover design for Grown by Tiffany D. Jackson — featuring art by Rachelle Baker and designed by Erin Fitzsimmons — positions its title in an earring worn by the protagonist.

Tiffany and her publisher, Katherine Tegen (an imprint of HarperCollins), created a bamboo version of these earrings as a giveaway item in their preorder campaign. She posted pictures of herself wearing the earrings on social media, effectively generating hype and preorders — Grown launched as a New York Times bestseller!

Some book bloggers and bookstagrammers received these earrings early, and many of them shared pictures of themselves wearing these earrings or using them as bookstagram props. Tiffany compiled some of these images on Instagram, reminding readers that these earrings were part of her preorder campaign and expressing gratitude for bloggers’ early coverage.

2. Self-publish a prequel to a traditionally published book or series to run price promotions

Brenda Novak used this strategy as part of her marketing campaign promoting Face Off, book 3 in her traditionally published Evelyn Talbot thriller series, and this book was an instant USA Today bestseller! Before Macmillan/St. Martin’s Press published book 1 in the series, Brenda self-published Hanover House, a 200-page prequel, and priced it at $3.99. Within the prequel, she encouraged readers to buy the subsequent books via a letter in the front matter and an excerpt of book 1 in the back matter. After the excerpt, she included links to the retailer product page to make it as easy as possible for readers to buy.

Since Brenda had control over pricing for this self-published prequel, she could discount it whenever she liked. For example, about a month before the launch of book 3 in the series, she discounted the prequel to $0.99. She figured that would be the right timing for new readers to buy this prequel, make their way through books 1 and 2, and be eager for book 3 upon launch.

In order to drive as many unit sales as possible, Brenda ran a BookBub Featured Deal to the Psychological Thrillers category. Featured Deals can generate a high volume of exposure and often result in subsequent sales of an author’s other titles — 70% of authors report an increase in sales of their other books (including full-priced books!) after running the promotion. The Featured Deal for Hanover House generated over 6K clicks and 1.5K sales.

Note: Brenda cleared this idea with her publisher before writing Hanover House. If you’re under contract with a traditional publisher, communicate your plans to publish connected content early to ensure you have their approval!

Link to the rest at BookBub Partners

PG notes that Mrs. PG has used Zazzle to produce merchandise to help promote her books. 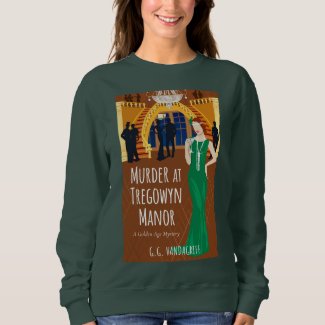