PG came across an item about VPN (Virtual Private Network) services during some of his online technology meanderings. He was about to move on when he thought about authors using restaurants, libraries or other places with public wifi for their writing locations.

The same concerns for those sorts of settings would also apply to those who live in apartment buildings or complexes and use wifi there. Those who use wifi in single-family homes in a traditional US neighborhood will likely be able to locate a few of their neighbors’ wifi nodes as well.

If you can “see” others’ wifi router names, they can likely “see” yours as well.

Over the past three years, a record 73 percent of all U.S. businesses have had [their] data breached – 67 percent globally.

Some of these breaches – like Equifax, Target, PlayStation Network, and others – have exposed the data of hundreds of millions of customers.

Even more unfortunate is that an estimated 93 percent of these breaches could have been avoided by putting data security fundamentals at the forefront, according to an analysis by Online Trust Alliance (OTA).

One of the easiest and most popular ways to secure both you and your customers’ data is through something called a virtual private network, or a VPN.

A VPN masks your IP address to prevent outside parties from obtaining your physical location and identifying your internet provider. They can be used in personal browsers, business endpoints, and any other device you can think of.

VPNs protect business users anywhere – even in coffee shops and other locations that are renowned for having unsecured internet connections. A VPN can also facilitate the secure transfer of information across networks, both public and private.

For an internet connection to work, there needs to be a mutual transfer of information from your device, to an internet service provider, to the internet itself, and back. This process is constantly in motion.

Users without a VPN run the risk of having personal data exploited by hackers, internet service providers, and even government surveillance agencies. This risk is multiplied when placing trust in unsecured internet connections. 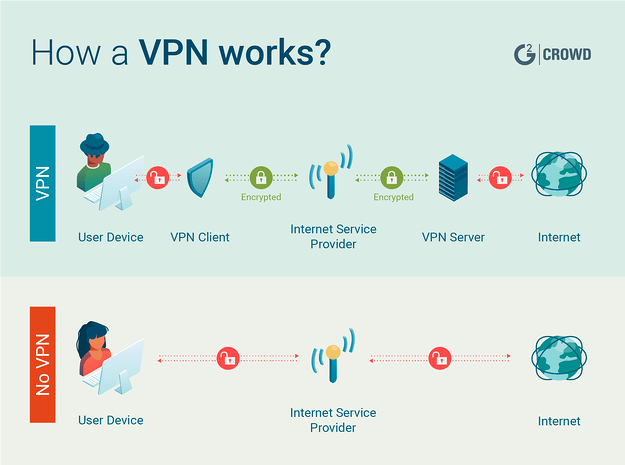 Link to the rest at Learning Hub

The Learning Hub lists Ten Free VPN providers with descriptions of each.

Here are a few ways you can use a VPN that you might not have thought about from ReadWrite:

Travel sites don’t treat all traffic equally. You could see different prices on your smartphone, your tablet, and your computer for the same flights and hotel rooms. The game of travel savings gets frustrating quickly, but through a VPN, you can mask your intentions from travel sites and gain access to unbiased pricing.

Use your VPN to spoof different locations and see how prices change. The same flight from Dallas to New York might cost far less if the airline website believes the person searching lives in Australia. Over time, VPN travel searches could save your business thousands.

Hackers sit on public Wi-Fi to scour data from unsuspecting users. Business users regularly access strange Wi-Fi locations to do their work, which makes them common targets for information thieves. If you want to keep your company’s information safe, don’t let employees use public Wi-Fi without protection.

Make it easy for your employees to use a VPN to create a more secure connection before using public Wi-Fi. Even if hackers manage to view their activity, they won’t be able to learn anything of value or steal passwords. With a VPN on your side, your employees won’t have to wait until they get back to the hotel to finish working.

6. Prevent websites from gathering your information.

Do you spend a lot of time on your competitors’ pages? Are you worried that websites are collecting your data and selling it to third parties?

No matter where you browse, a VPN can mask your location from websites and prevent outside parties from collecting data that identifies you or your company. Personal VPN users lean on this function to prevent sites like Amazon and Facebook from tracking them across the web. By hiding behind a VPN, you can spy on your competition as much as you want, and no one will ever know.

Link to the rest at ReadWrite

Typically, when you sign up for a VPN, it will provide you an app or a browser link to access the VPN.

PG has a VPN app sitting on his computer’s desktop. Just like any other app or program, when PG wants to turn on his VPN, he clicks on the link and is connected within a few seconds.

PG uses Nord VPN (but has no relationship with the company other than as a plain-vanilla customer). He has a paid account at the company’s lowest-cost level.

When he clicks a desktop icon to start the VPN, it opens and automatically connects to one of thousands of Nord nodes in the US (if PG is in the US) after quickly locating the one that’s providing the best speeds when PG signs on.

If PG wants to connect through a VPN note located in a different country, the Nord app lets him pick from a list or click on a map to choose. PG just clicked on Mexico and was connected to a VPN server in that country in less than 10 seconds.