It’s not yet lunchtime, but the tables at Barbarestan, in Tbilisi, Georgia, are rapidly filling up. There, a waiter leads me down a small spiral staircase to the bottom floor. Above my head is a round, hand-built stone ceiling, and fresh flowers rest at the center of every table. When I’m seated, I ask to see “the book.” The waiter looks at me and smiles.

Two years ago, this restaurant—which is often lauded as one of the city’s best eateries—wasn’t just empty. It was on the verge of shuttering for good. For years, the Kurasbediani family ran this same space as a typical Georgian restaurant, serving up local staples such as khachapuri (cheese bread) and khinkali (Georgian dumplings). While they found success for a while, the reality was that it was one of many restaurants of its kind. Then, the business started struggling. The Kurasbediani family was forced to make a decision: Change things up and become profitable, or close it down.

“The restaurant was boring and business was going down,” says Andria, one of eleven children who helps run Barbarestan today. “So we decided to rebrand and renovate.” What that rebranding meant was the big question, especially since a few obstacles stood in the way. The culinary scene in Georgia was (and still is) very young, and couldn’t support an upscale restaurant.

One day, while contemplating their next move, the family took a walk to an antique market. They strolled past the tables of old accessories—cutlery, stationary, furniture—until they came to a stack of books. Suddenly, Andria’s father, Zviadi, stopped in his tracks and lowered his stare at one title. He knew immediately that this was no ordinary book, and the price tag echoed that reality: 150 Georgian Lari, or about $61.

The book, entitled Georgian Cuisine and Tried Housekeeping Notes, was published in 1874 by a Georgian princess named Barbare Jorjadze. Today, Princess Jorjadze is a national hero: She is considered the first feminist of the country, and is famous for her advocacy of women’s rights in Georgia. In her decree, she wrote about the damning expectations placed on women: “From a very young age, we are told, ‘since god made you a woman, you must sit silently, look at nobody, go nowhere, shut your ears and your eyes, and just sit there. Education and learning of languages is none of your concern.” Now, the Georgian National Library has dedicated a full room to her, in honor of her advocacy efforts. A copy of Georgian Cuisine and Tried Housekeeping Notes is on display at the Georgian Literature Museum and the Georgian National Library, too.

She also holds the distinction of being one of the country’s most famous authors. Princess Jorjadze wrote the book while traveling throughout Georgia as part of the royal family, compiling recipes from the different regions she visited. The book was intended as a guide for women of her era, with tips on dining etiquette and other 19th-century realities, such as housekeeping and cleaning advice.

But the bulk of the book—and what caught the eye of the family—was its extensive collection of recipes, close to 900 in total, that capture the spirit and evolution of Georgia’s cuisine over the centuries. By including recipes for foreign dishes, such as blancmange (a French milk pudding), it also documented the outside influences of the Soviet Union, Europe, and the Middle East. “[Princess Jorjadze] could not visit the different countries, but she could collect recipes from all over the world,” Andria says. “At that time, [Georgia] was a crossroads between Europe and Asia.”

With the cookbook in tow, it took the family five months to renovate the restaurant and reimagine its first menu. The first thing was to find a chef willing to breathe life into the book, which turned out to be a tall order. “Everything changed,” Andria says. “We changed our environment, and we got a new team. We approached more than five chefs in Georgia before we found one willing to join us.”

In the two and a half years since its reopening in December 2016, Barbarestan has, so far, recreated 125 of the recipes in Jorjadze’s book. Some of the most popular dishes include Shila Plavi, a creamy, spiced rice dish with meat or mushrooms, and Dambal Khacho, a traditional Georgian cheese that the restaurant cures underground for six months.

Still, the family wanted to maintain the down-to-earth, family-run appeal of the old restaurant, too. Originally built in 1866 as a butcher shop, the space oozes character, and meat hooks still hang above the tables. During the redesign, the family added aspects of old-world elegance to its place settings, lighting, and ambiance in order to strike a balance—and bridge the gap—between the past and the present, the young and the old, and, of course, the princess and the public. “The concept is to make our guests feel that they are at home,” Andria says. “That was the most important idea.”

[T]hey have instead made a deliberate commitment to continuously rotating chefs through the kitchen. This, Andria says, will allow for new perspectives and new interpretations of the recipes found in the book. “Our grand chef will be our cookbook, and we will change our cooks every year or two,” he explains.

Link to the rest at Atlas Obscura

The OP contains some nice photos of the restaurant and the family behind it.

Here’s a copy of the cookbook: 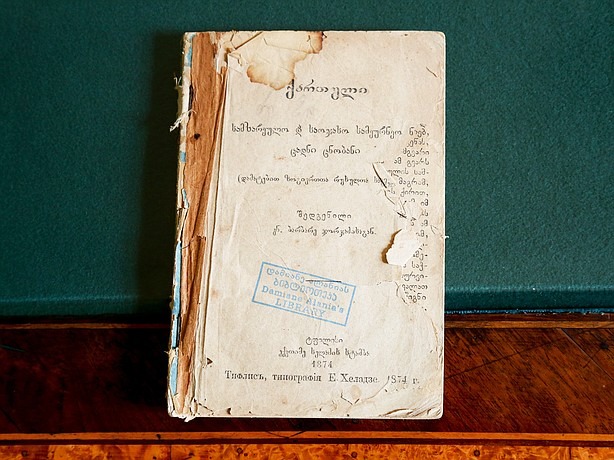 And a photo of the princess. 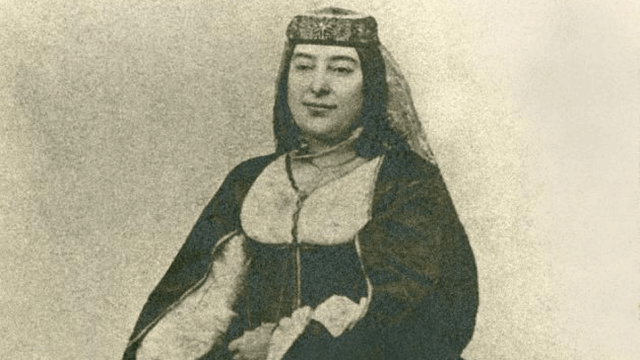 Here’s a link to an article with more information about Princess Barbare Jorjadze.