It has been a year of joy mixed with sorrow for Little Free Library. The Wisconsin nonprofit organization behind the iconic, seemingly ubiquitous containers mounted on posts and filled with books for the taking is celebrating its 10th anniversary this month while still mourning the loss of founder and executive director Todd Bol. Bol, 62, died last October, just weeks after being diagnosed with pancreatic cancer.

To mark its May 17 birthday, LFL sponsored a virtual international event called the Big Share. Participants were invited to visit a Little Free Library between May 17 and 19, deposit a book, and post a photo on social media with the #LFL10 hashtag to enter a drawing for a gift card to LFL’s online store. By the end of the weekend, there were 730 photos posted on Instagram; hundreds more were posted on Facebook and Twitter.

In September, Houghton Mifflin Harcourt’s Clarion Books imprint will publish Little Libraries, Big Heroes by Miranda Paul, illustrated by John Parra—a children’s picture book that begins with the story of how, in spring 2009, Bol constructed the first Little Free Library, a wooden replica of a one-room schoolhouse, to honor his late mother, a teacher. He mounted it on a post, filled it with books, and placed it in front of his house in Hudson, Wis., with a sign attached urging passersby to take a book or leave a book. It is the same model LFL follows today.

“It’s an alternative way to get really good books into people’s hands,” Bol told PW in 2011 as the concept started to snowball. With its popularity growing, LFL became a nonprofit organization in 2012, at which point there were about 5,000 Little Free Libraries in all 50 states and in 40 countries abroad.

As LFL marks its 10th anniversary, there are more than 80,000 registered Little Free Libraries in 91 countries, which have shared a total of at least 120 million books.

Link to the rest at Publishing Perspectives

If you haven’t seen PG’s prior posts on this topic, here are photos of a couple of Little Free Libraries. 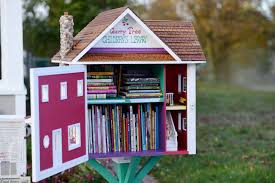