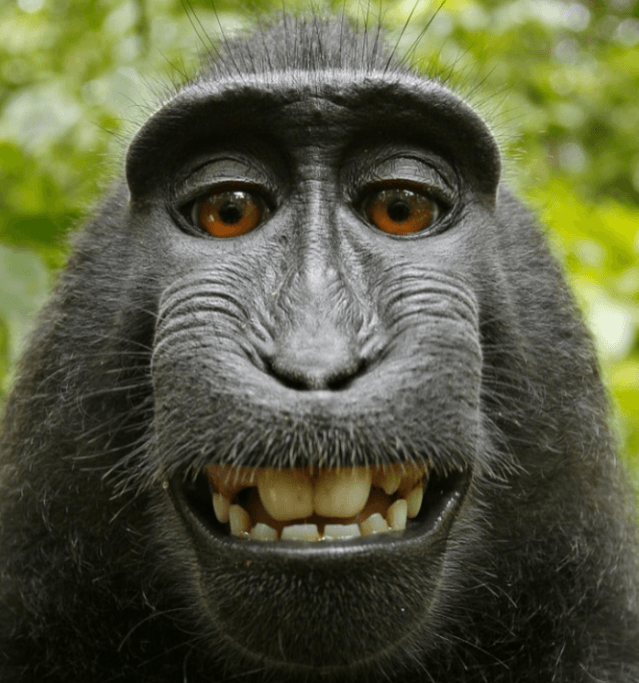 A federal appeals court in San Francisco ruled Monday that Naruto, a “crested macaque,” does not have legal standing to file a copyright claim against a nature photographer, as Naruto is not a person.

The case dates back to 2011, when British nature photographer David Slater was on a shoot on the Tangkoko reserve in Indonesia. Naruto somehow swiped Slater’s camera and managed to snap a few pictures. Slater later published a book, including some of the so-called “monkey selfie” images.

People for the Ethical Treatment of Animals, the advocacy group seeking to represent Naruto, then filed a lawsuit, saying that Naruto’s copyright of the image had been violated. In January 2016, a federal district judge in San Francisco ruled that Naruto had no standing: not being a person, he could not bring a lawsuit.

The 9th US Circuit Court of Appeals has now affirmed that decision, despite the fact that the lawsuit settled in September. Slater agreed to donate 25 percent of future revenue of Naruto’s images to the Tangkoko reserve.

Of course, given that Slater does not own the photographs in question—Naruto did take them, after all—he cannot assert copyright over the images. According to the US Copyright Office, they are not copyrightable.

Link to the rest at Ars Technica

From a footnote to the Court’s decision:

We feel compelled to note that PETA’s deficiencies in this regard go far beyond its failure to plead a significant relationship with Naruto. Indeed, if any such relationship exists, PETA appears to have failed to live up to the title of “friend.”

PETA apparently obtained something from the settlement with Slater, although not anything that would necessarily go to Naruto: As “part of the arrangement,” Slater agreed to pay a quarter of his earnings from the monkey-selfie book “to charities that protect the habitat of Naruto and other crested macaques in Indonesia.

The greatly-assailed photographer undoubtedly wants to stay in the jungle and out of the courtroom for the remainder of his life, but PG wishes he would sue PETA for his damages, including legal fees.

PG suggests the trial judge should have booted PETA out of court on the photographer’s first request that it do so.

For visitors from overseas, in PG’s fully-evolved-from-apes opinion, this case is an example of something called lawfare in the United States. Resolution of a legitimate dispute is not the objective of lawfare. Punishing someone who has violated some unwritten rule (or establishing some unwritten rule that has never been established before) is the real objective of lawfare.

While one might point to the Naruto litigation as a good publicity stunt for PETA, Mr. Slater, the photographer in question, has had to pay real money (and a lot of it) to defend himself from this lawsuit and talking to lawyers, diminishing or eliminating the time he would have spent taking photographs of wildlife in order to support himself.

Although PG no longer represents clients in litigation matters, from his past experience doing so, he can attest that being a party in a court case takes a significant emotional toll on most people. He wishes Mr. Slater well and hopes he continues his career with great success.