From The Copyright Alliance:

In 2017, K-Mart was under fire for allegedly infringing the copyright on Rasta Imposta’s registered banana costume. In its complaint, Rasta Imposta alleges that the retailer ended its business relationship with Rasta Imposta shortly before Halloween 2017, after having sold Rasta’s banana costume for years, but began selling its own version of the banana costume, a move Rasta calls “willful disregard of [its] intellectual property rights and copyright registrations.” The parties eventually settled out of court.

Rasta filed a similar lawsuit, also in 2017, against its former business partner Kangaroo Manufacturing, Inc. after discovering that the company was selling banana costumes that closely resembled Rasta’s registered works. After the district court issued a preliminary injunction, Kangaroo filed an interlocutory appeal challenging the injunction. The appellate court affirmed the injunction and held that although the banana costume was a useful article, the costume’s artistic features (i.e., the combination of colors, lines, shape, and length) were separable and capable of independent existence, and thus were copyrightable. The court also denied the defendant’s arguments that the banana costume was ineligible for protection because of the merger doctrine and scene a faire doctrine.

Link to the rest at The Copyright Alliance

If your French is a bit rusty, per Wikipedia,

Scène à faire (French for “scene to be made” or “scene that must be done” . . . is a scene in a book or film which is almost obligatory for a genre of its type. In the U.S. it also refers to a principle in copyright law in which certain elements of a creative work are held to be not protected when they are mandated by or customary to the genre.

For example, a spy novel is expected to contain elements such as numbered Swiss bank accounts, a femme fatale, and various spy gadgets hidden in wristwatches, belts, shoes, and other personal effects. The United States Court of Appeals for the Second Circuit interpreted the scènes à faire doctrine expansively to hold that a motion picture about the South Bronx would need to feature drunks, prostitutes, vermin, and derelict cars to be perceived as realistic, and therefore a later film that duplicated these features of an earlier film did not infringe.

The policy rationale of the doctrine of scènes à faire is that granting a first comer exclusivity over scènes à faire would greatly hinder others in the subsequent creation of other expressive works. That would be against the constitutionally mandated policy of the copyright law to promote progress in the creation of works, and it would be an impediment to the public’s enjoyment of such further creative expressions. By the same token, little benefit to society would flow from grants of copyright exclusivity over scènes à faire.

Another significant case in United States law was Ets-Hokin v. Skyy Spirits (2003), in which scenes à faire was upheld as an affirmative defense by the United States Court of Appeals for the Ninth Circuit. The case involved a commercial photographer, Joshua Ets-Hokin, who sued SKYY vodka when another photographer created advertisements with a substantially similar appearance to work he had done for them in the past. It was established that the similarity between his work and the later works of the photographer was largely mandated by the limited range of expression possible; within the constraints of a photo shoot for a commercial product there are only so many ways one may photograph a vodka bottle. In light of this, to establish copyright infringement, the two photos would have been required to be virtually identical. The originality of the later work was established by such minor differences as different shadows and angles.

The plaintiff was the writer and producer of a play called “Hum Hindustani” that was produced in the period of 1953-1955. The play was based on the evils of provincialism. The defendant in 1956 produced a film called “New Delhi“. One of the themes of the film was provincialism, too. While evaluating whether or not the defendant had infringed the plaintiff’s copyright, the Supreme Court of India held:

Therefore, the court held that there is a standard way of dealing with the theme of provincialism, and there can be no copyright over that theme. Consequently, a question of infringement does not even arise.

Back to the appellate opinion in Silvertop Associates, Inc., dba Rasta Imposta v. Kangaroo Manufacturing, Inc., the court provided an illustration with its opinion: 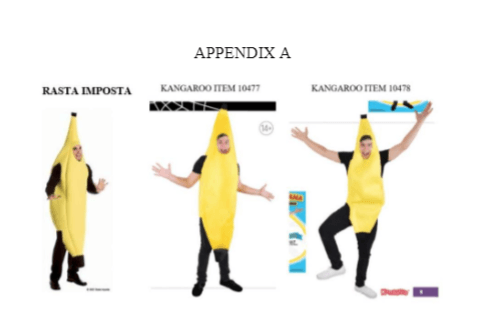