After 22 years of practicing law, the Rio de Janeiro-based [Cristiane] Serruya decided to take up then pen. After after 6-7 years of writing, had churned out more than 30 works and had one of her short stories published in a best-selling collection.

However, in less than 24 hours, all of that was gone.

As of this writing, her site is down, her books, though online, likely won’t be for long and all of her social media presences, including Twitter, Instagram and Facebook, have either been deleted [or] have fallen silent.

Like so many authors before her, Serruya had become the center of a rapidly evolving plagiarism scandal. It’s a scandal that’s left her reputation in complete tatters and made her a pariah among romance authors and readers alike.

However, what’s so amazing about this story isn’t just how quickly Serruya’s downfalls was, but her handling of it. It’s a rare situation where a plagiarist, once caught, managed to make the scandal worse not by denying the allegations, but by admitting to something that many see as even worse.

The first salvo was fired by fellow romance author Courtney Milan. Milan, herself a lawyer (specifically one that has worked in intellectual property) , posted on her blog a lengthy teardown of Serruya entitled, “Cristiane Serruya is a Copyright Infringer, a Plagiarist, and an Idiot.”

The post highlighted over a dozen passages where she alleged that Serruya had copied from her in Serruya’s book Royal Love. The passages ranged from short sentences with moderate rewriting to whole multi-paragraph sections that were near verbatim. 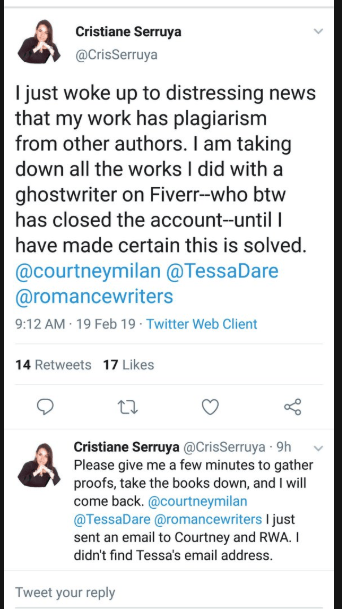 In short, she said that she was not responsible for the plagiarism. Instead, she put the blame on an unnamed ghostwriter she hired from the site Fiverr, a site that’s best known for enabling the hiring of low-cost freelancers.

Though some had suspected a ghostwriter much of the time the scandal was unfolding, others have remained skeptical, noting that Serruya has failed to identify who the person is or provide any proof, other than to say their Fiverr account is now closed.

But, even those who do tentatively believe Serruya often struggle to see why this confession is better. 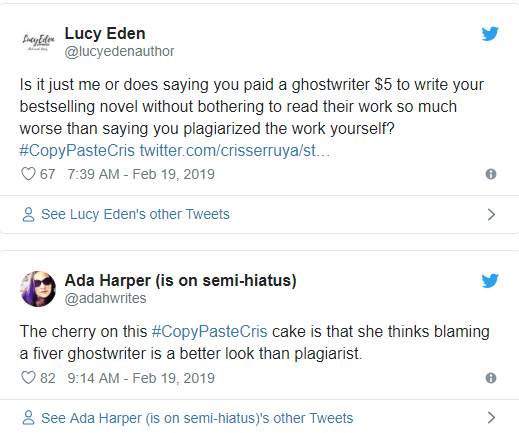 Link to the rest at Plagiarism Today

PG notes that avoiding plagiarism in the first place is, by a huge margin, better than any sort of mea culpa, stonewall, etc., after you have been accused of plagiarism.

However, PG was musing about how he would react if an author who had committed plagiarism came to him for legal assistance.

As an fyi, in a prior life, PG was appointed to represent a variety of criminal defendants who had committed much more serious misdeeds than even the worst plagiarist has. Public Defenders had not yet come to that part of the state where he was living and the local judge regarded the acceptance of such cases, even without any likelihood of compensation, as part of the duty an attorney owed to the public in return for the privilege the state had given him/her to practice law. PG agreed with the judge and didn’t fuss when one of these cases came his way. He also acted as an unpaid assistant prosecuting attorney a couple of times for the same reasons.

One more point – sometimes the advice a client requires is a combination of legal and practical business recommendations.

So, with that background, how would the visitors to TPV suggest PG advise an author/client who had committed plagiarism on more than a small scale?