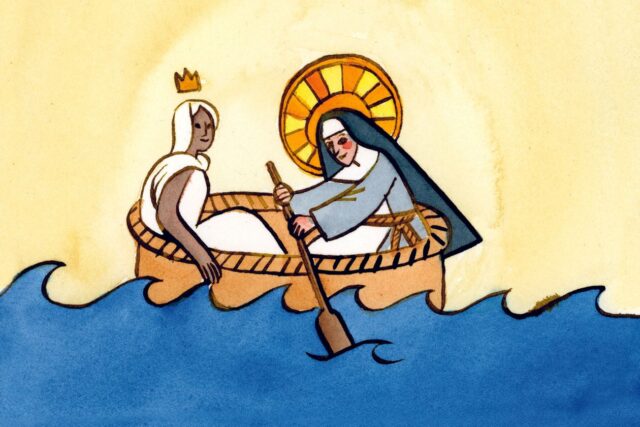 Growing up in a remote island convent, 11-year-old Margaret has long wondered about her origins. From her assiduous quizzing of the sisters of St. Elysia, the girl knows that she was brought to the island as a baby, but she doesn’t know why. Margaret’s true identity is but one of the mysteries woven into “Queen of the Sea” (Walker, 394 pages, $24.99), an engrossing graphic novel by Dylan Meconis set in an alternative Tudor realm in which England is Albion, Scotland is Ecossia, and the Virgin Mary and Jesus are known as the Mournful Mother and the Sorrowful Son.

Twice a year a ship arrives with provisions for the Elysian order, as we see in the clear lines and restrained palette of Ms. Meconis’s illustrations. Margaret’s understanding of the convent and its occupants—or are they prisoners?—begins to expand when the ship delivers first a boy her own age and then a haughty, sharp-featured young woman who chafes under the constant observation of a tyrannical chaperone. In unspooling an exciting story of political intrigue drawn from the real life of Elizabeth I, the author introduces readers ages 10 to 16 to the disciplines of cloistered life, treating with interest and respect such practices as the veneration of holy relics and the codified gesturing of silent meals. And who is Margaret? Let’s say that she is not the only redhead on the island to bear a resemblance to a certain broad-chested, oft-married Tudor monarch.