If we want to encounter the first Thanksgiving as the Pilgrims experienced it in the fall of 1621, “we must put aside our images of great wide Puritan collars and large buckles (never worn by the godly of early Plymouth, who rejected all jewelry), roast turkey (absent from the earliest record of the event), and cranberry sauce (quite unknown in the early colony).” So writes Martyn Whittock in “Mayflower Lives,” an incisive series of biographical and historical essays on the Mayflower’s passengers.

All we know about the original Thanksgiving, Mr. Whittock explains, comes to us from 115 words in a document known as Mourt’s Relation, written to persuade London investors not to give up on the colony. We know that the original feast lasted three days and was attended by the Pilgrims and about 90 Native Americans from the Wampanoag tribe. It featured a meal consisting of venison, supplied by the natives, and fowl, supplied by the English. That’s it.

Myths aside, the striking quality about the Mayflower’s trans-Atlantic journey—and this emerges beautifully in Mr. Whittock’s narrative—is just how archetypally American the whole affair was. The settlement’s mission, like the nation it began, needed both “saints” and “strangers,” to borrow the term historians use to distinguish the Puritan separatists from the rest of the Mayflower’s passengers: fervent Calvinists seeking freedom to worship God as they believed right but also economic migrants and seafarers seeking profit or adventure.

A comparison with the colony of Jamestown, founded in 1607, makes the point nicely. Jamestown was the project of merchants in search of a quick payday, and it was carried out by rugged soldiers and well-to-do settlers unaccustomed to hard work. Within a few years, Jamestown’s inhabitants had mostly either died or fled. The godly among the Plymouth settlers, by contrast, were transfixed by a vision of the New Jerusalem. In the minds of Pilgrims such as William Bradford and William Brewster—the latter had studied at Peterhouse, Cambridge, for a time a hotbed of Puritanism—the cause of Reformed Protestantism was dying in Europe. The New World beckoned, and no measure of physical hardship could divert them from achieving their end.

But a band of theologians and pious congregants, however dedicated, wasn’t likely to survive privation, disease and hostile natives. They needed what a former age would have called men of action, which is why they hired Myles Standish, a diminutive but accomplished soldier. Standish knew how to hunt, how to fix the settlement’s position in order to make it less vulnerable to attack, and what to do about deadly threats. In March 1623, hearing that a group of warriors from the Massachusetts tribes had determined to wipe out a nearby English settlement, Wessagusset, Standish set up a meeting with the Massachusetts sachem or chief. At the meeting, Standish and his men waited for an opportune moment and killed their adversaries with knives.

Standish has been judged critically for this act of premeditated bloodshed, and not altogether unfairly. But the Plymouth Colony, as Mr. Whittock rightly notes, would likely not have survived without the aid of such a man. Here and elsewhere, Mr. Whittock, an English author of several books on European history, is refreshingly reluctant to judge his subjects harshly. Gone are the usual snide remarks about the Puritans’ narrowness and grimness. He notes, for example, that the Puritans regarded monogamous sex as a “joyful expression of love,” an outlook their non-separating Anglican neighbors regarded as “very edgy, if not downright alarming.” With an infection wiping out half the colony in its first year, the little Calvinist company’s edginess probably kept it from oblivion. 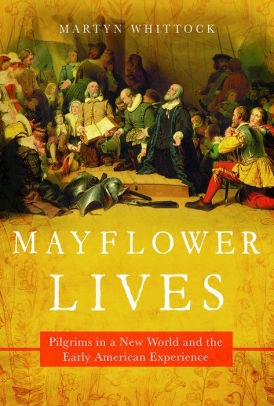 Scroll back to top Secured By miniOrange