Mrs. PG likes Bookbub and, apparently, Bookbub likes Mrs. PG because it’s running a free book promotion for another of her Regency romances.

The title of this book is The Taming of Lady Kate.

What’s this book about? You can read what it says on Amazon, but PG has a unique perspective on Mrs. PG’s books that he will share.

There’s a gal named Kate. She’s dead now because she lived a long time ago.

While Kate was alive, she had a problem. If she wanted to inherit a bunch of money, she had to get married. At about the same time, a guy named Jack had the same problem so they shared a common interest.

So there’s no prenup negotiation drama in this book. And nobody named Manny.

Jack is a Marquis and Kate is a Lady (no, not that kind of Lady).

Kate wants to marry some other guy, but her dead father says no (in his will), even if they get a prenup.

Kate is a spunky gal. Jack likes spunky gals. They have that in common even if she’s not a Marquis.

The things that Kate and Jack have in common are piling up.

PG won’t spoil the ending of the story by saying what they do instead of getting a prenup.

Here’s a picture of Kate. PG forgot to ask Mrs. PG if her hair is really that color or if she has it done by Rex of Hollywood. 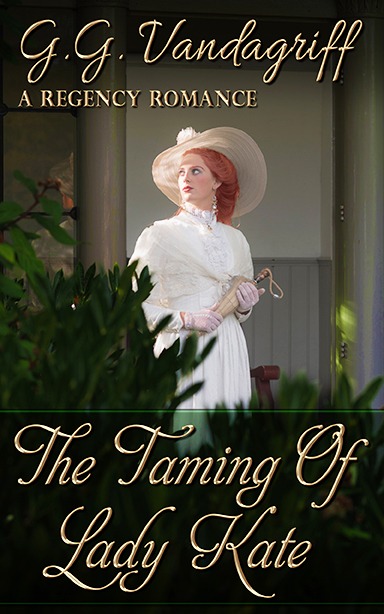 Here’s where you can get The Taming of Lady Kate. It’s free right now, but you have to read the book to understand why Kate accepts taming.

The PG’s appreciate your support.

PG checked Mrs. PG’s Author Rank and her new book’s ranking in the early evening of today’s Bookbub campaign. He was pleased to find the following:

Thanks to all TPV visitors who downloaded.

19 thoughts on “The Taming of Lady Kate”