The holiday commemorates the Declaration of Independence of the United States on July 4, 1776.

The Continental Congress declared that the thirteen American colonies were no longer subject (and subordinate) to the monarch of Britain and were now united, free, and independent states. The Congress had voted to declare independence two days earlier, on July 2, but it was not declared until July 4.

Nike Inc. is yanking a U.S.A.-themed sneaker featuring an early American flag after NFL star-turned-activist Colin Kaepernick told the company it shouldn’t sell a shoe with a symbol that he and others consider offensive, according to people familiar with the matter.

The sneaker giant created the Air Max 1 USA in celebration of the July Fourth holiday, and it was slated to go on sale this week. The heel of the shoe featured a U.S. flag with 13 white stars in a circle, a design created during the American Revolution and commonly referred to as the Betsy Ross flag.

After shipping the shoes to retailers, Nike asked for them to be returned without explaining why, the people said. The shoes aren’t available on Nike’s own apps and websites.

“Nike has chosen not to release the Air Max 1 Quick Strike Fourth of July as it featured the old version of the American flag,” a Nike spokeswoman said.

After images of the shoe were posted online, Mr. Kaepernick, a Nike endorser, reached out to company officials saying that he and others felt the Betsy Ross flag is an offensive symbol because of its connection to an era of slavery, the people said. Some users on social media responded to posts about the shoe with similar concerns. Mr. Kaepernick declined to comment.

The design was created in the 1770s to represent the 13 original colonies, though there were many early versions of the America flag, according to the Smithsonian. In 1795, stars were added to reflect the addition of Vermont and Kentucky as states.

In 2016, the superintendent of a Michigan school district apologized after students waved the Betsy Ross flag at a high-school football game, saying that for some it is a symbol of white supremacy and nationalism, according to Mlive.com, a local news outlet. While the flag’s use isn’t widespread, the local chapter of the National Association for the Advancement of Colored People said at the time that it has been appropriated by some extremist groups opposed to America’s increasing diversity.

Here’s a replica of the offending flag: 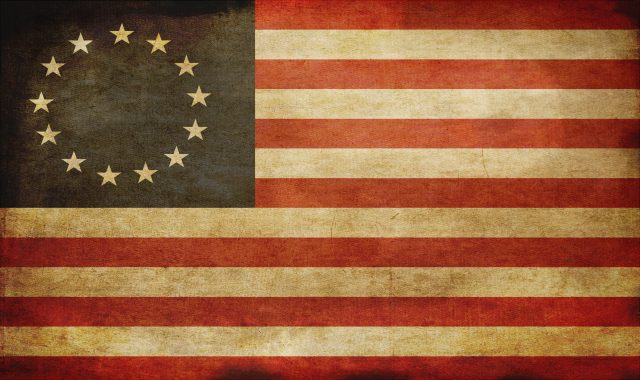 Here’s the story behind this flag per The History Channel:

Perhaps the best-known figure from the American Revolutionary era who wasn’t a president, general or statesman, Betsy Ross (1752-1836) became a patriotic icon in the late 19th century when stories surfaced that she had sewn the first “stars and stripes” U.S. flag in 1776. Though that story is likely apocryphal, Ross is known to have sewn flags during the Revolutionary War.

Elizabeth Griscom was born on January 1, 1752, in the bustling colonial city of Philadelphia. She was the eighth of 17 children. Her parents, Rebecca James Griscom and Samuel Griscom were both Quakers. The daughter of generations of craftsman (her father was a house carpenter), young Betsy attended a Quaker school and was then apprenticed to William Webster, an upholsterer. In Webster’s workshop she learned to sew mattresses, chair covers and window blinds.

In 1773, at age 21, Betsy crossed the river to New Jersey to elope with John Ross, a fellow apprentice of Webster’s and the son of an Episcopal rector—a double act of defiance that got her expelled from the Quaker church. The Rosses started their own upholstery shop, and John joined the militia. He died after barely two years of marriage. Though family legend would attribute John’s death to a gunpowder explosion, illness is a more likely culprit.

In the summer of 1776 (or possibly 1777) Betsy Ross, newly widowed, is said to have received a visit from General George Washington regarding a design for a flag for the new nation. Washington and the Continental Congress had come up with the basic layout, but, according to legend, Betsy allegedly finalized the design, arguing for stars with five points (Washington had suggested six) because the cloth could be folded and cut out with a single snip.

The tale of Washington’s visit to Ross was first made public in 1870, nearly a century later, by Betsy Ross’s grandson. However, the flag’s design was not fixed until later than 1776 or 1777. Charles Wilson Peale’s 1779 painting of George Washington following the 1777 Battle of Princeton features a flag with six-pointed stars.

Betsy Ross was making flags around that time—a receipt shows that the Pennsylvania State Navy Board paid her 15 pounds for sewing ship’s standards. But similar receipts exist for Philadelphia seamstresses Margaret Manning (from as early as 1775), Cornelia Bridges (1776) and Rebecca Young, whose daughter Mary Pickersgill would sew the mammoth flag that later inspired Francis Scott Key to write “The Star-Spangled Banner.”

In June 1777, Betsy married Joseph Ashburn, a sailor, with whom she had two daughters. In 1782 Ashburn was apprehended while working as a privateer in the West Indies and died in a British prison. A year later, Betsy married John Claypoole, a man who had grown up with her in Philadelphia’s Quaker community and had been imprisoned in England with Ashburn. A few months after their wedding, the Treaty of Paris was signed, ending the Revolutionary War. They went on to have five daughters.

Link to the rest at The History Channel

PG will note that Ms. Ross’ connection with the Quakers is particularly ironic. Per Wikipedia:

The Religious Society of Friends (Quakers) played a major role in the abolition movement against slavery in both the United Kingdom and in the United States of America. Quakers were among the first white people to denounce slavery in the American colonies and Europe, and the Society of Friends became the first organization to take a collective stand against both slavery and the slave trade, later spearheading the international and ecumenical campaigns against slavery.

Quaker colonists began questioning slavery in Barbados in the 1670s, but first openly denounced it in 1688. In that year, four German settlers (the Lutheran Francis Daniel Pastorius and three Quakers) issued a protest from Germantown, close to Philadelphia in the newly founded American colony of Pennsylvania. This action, although seemingly overlooked at the time, ushered in almost a century of active debate among Pennsylvanian Quakers about the morality of slavery which saw energetic anti-slavery writing and direct action from several Quakers, including William Southeby, John Hepburn, Ralph Sandiford, and Benjamin Lay.

During the 1740s and 50s, anti-slavery sentiment took a firmer hold. A new generation of Quakers, including John Woolman, Anthony Benezet and David Cooper, protested against slavery, and demanded that Quaker society cut ties with the slave trade. They were able to carry popular Quaker sentiment with them and, beginning in the 1750s, Pennsylvanian Quakers tightened their rules, by 1758 making it effectively an act of misconduct to engage in slave trading. The London Yearly Meeting soon followed, issuing a ‘strong minute’ against slave trading in 1761. On paper at least, global politics would intervene. The American Revolution would divide Quakers across the Atlantic.

In the United Kingdom, Quakers would be foremost in the Society for Effecting the Abolition of the Slave Trade in 1787 which, with some setbacks, would be responsible for forcing the end of the British slave trade in 1807 and the end of slavery throughout the British Empire by 1838.

Link to the rest at Wikipedia

So Kaepernick and Nike managed a woke twofer, smearing one of the most famous women in the history of the early United States and a religious group (during an era when religious groups were quite influential in American public life) that was the single most prominent early religious force urging the abolition of slavery.