There is a great deal of social pressure in the book industry to be smiley and gushingly positive all the time – and we are, when it is appropriate. The many authors whose work we love, and the many small publishers in particular whose work adds so much to what we offer as an independent bookshop, we will support with all our strength. But every now and then someone has to find both the courage and the words to explain that something is not right (even if they are damned for it) and to try to make suggestions as to what needs to change.

The British Book Industry has a monstrous fair-trade and exploitation issue skulking beneath the surface which is slowly suffocating everything – it needs to be dragged in to the light and be seen for what it is.

Discussion about having a fair-trading arrangement for the production and selling of books needs to be moved up a gear; we need a pricing agreement that is coupled with a covenant about the fair treatment of authors. I’ve spoken to authors and illustrators who have been told off and threatened by their publishers for commenting on, or even just for sharing our previous blogs – making all but the bravest less willing to add their experiences to the discussion, except privately. Oddly perhaps, I’ve had the same experience with publishers; half a dozen publishers, both large publishing houses and small independents have contacted me privately with words of encouragement, telling me that the pressure on them to release books to Amazon, WH Smith and the supermarkets at extremely high discounts is embarrassing, crippling to their profit margins and has been the catalyst that has changed the nature of their business and not, they feel, for the better.

Our friends in indie bookshops across the country are heading to Parliament soon to meet and discuss the plans put forward by The Big Green Bookshop for an Alliance of Independent Bookshops. The initial proposal included a plan for indie bookshops also to secure higher discounts from publishers – enabling them to compete in a low-price war. It is important that all booksellers understand what happens when a book is discounted, and who it is who feels the burden of this discount culture the most.

The moment I go to the publisher and request a higher discount, the royalty rates for the author start to creep lower. When the Net Book Agreement was removed we were in a pre-digital world, no one had anticipated the arrival of e-readers (even though the first model of the Kindle in 2007 sold out within just a few hours) or the growth of leviathan that is Amazon – and as a result no one expected that trade discounts, even when ‘liberated’ from the constraint of the Net Book Agreement, would go above 55%. But they rocketed to much higher, and in cases now some retailers are demanding more than 70% discount on books from the publisher – meaning that the royalties back to authors, which are tied closely in to the rate of discount, are also decreasing year on year.

Many authors however are struggling; writers with thirty years’ experience and many dozens of important and successful books to their name, are living on their over-drafts, taking second jobs to make ends meet, surviving by their partner’s incomes, or realising that they can earn more money by not writing but by doing events based on previous books. I spoke to one prominent, award-winning writer who told me ‘I have produced more than 200 books in 30 languages; many of my titles have sold over 1 million copies, I have a stack of awards – and yet I have not yet earned out the £10,000 advance I was given to cover two years’ work, and struggle to make ends meet‘. I’ve met writers who, just to enable them to continue in their chosen profession, are borrowing money from relatives, who have moved abroad for a lower cost of living and many whose thoughts of giving up are so dominant that I think it is fair to say that there is a prowling mental health risk too.

The royalty arrangements for authors are so complex that the vast majority of authors do not even claim to understand them. If you know an author well enough to ask, please get them to show you their royalty statement – what you’ll see is a standard 10% of the recommended retail price for a new hardback book but then a separate and much lower rate for ‘discounted sales’ and another lower rate for ‘online sales’ (Amazon). When you have a complex contract, a lot can be hidden, intentionally or otherwise. That 10% as a full price royalty is only for hardbacks. On paperbacks it is, as a standard, 7.5% – with variations. And royalties are different again when a book is prepared for export. Royalties can go up according to sales and over time – but only once an author has earned out the advance on a royalty (if there is an advance).

On ‘Special Sales’ (of which more later) the terms are, as standard, 10% of publisher’s net receipts, but when that book is so heavily discounted, that equates to about 3% of rrp – so for a £1 book, and author gets between 2p and 3p. It is important too that we start to question the level of transparency when out-dated agreements underpin the entire industry.

In economic terms the issue is not only one of fair apportionment but also of clarity of who takes the risk. I can already hear publishers and trade magazine writers shouting ‘The publisher! The publisher takes the risk’. Yes, certainly the publisher is taking much of the financial risk, and many of the smaller publishers are making very modest profits indeed as a result. However, they are not taking all the risk. By firing out huge numbers of books, placing marketing behind a few and leaving the others to sink or swim, the culture of large-scale publishing is pushing a huge part of the risk back on to the authors, whose remuneration is already low. On the face of it writers, as a producer of goods, have a low production cost – they work largely alone, at home, with minimal tools. And this is the way that the publishing industry generally views authors now – they are cheap producers. And if one gives up because they can’t make ends meet, there will always be another easily and cheaply obtained.

The largest retailers seem to be in control of pricing and the perception of value, while the large publishers place themselves in importance far above the authors and illustrators on whose work they rely.

Large retailers are demanding higher and higher discounts from the publishers and the publishers are protecting profits by using the antediluvian complexity of authors’ contracts and royalty arrangements as a cushion. Royalties are not protected in any way against either a publisher’s decision to discount, or a retailer’s demand for a discount. I hear from publishers that presence on Amazon is now prerequisite for sales success – a lack of presence there now seems to mean that other retailers won’t take it and reviewers won’t cover it; so publishers would say that they have little choice but to fall in with the demands made for 53-70% discounts. If the net revenue by the publisher then is only 30% of cover price, the author will get 30p of a £10 book, not the 60p they would have got had it been sold at a standard 40% trade discount.

Many authors struggle to make any claim to their back catalogue of work, even when the publisher has no intention either of supporting the development of that author, or of ever re-publishing older books. Authors are having their perceived value, along with their incomes, reduced year on year. Few rights, dubious contracts, low income.

In addition to this there are several murky areas of publishing about which we should all be concerned – ‘Special Sales’ is one that leaps to mind. This is when a publisher can sell on an author’s backlist (the author having little choice because of, again, contractual arrangements) to a company that will then produce the book to sell at very low price at discount stores, through catalogues or at book fairs. In this case, the author’s royalties are even lower: just 2-3%, while the publisher will take 60-70% of the profit with the books being printed at extremely low cost.

Link to the rest at Kenilworth Books

Kenilworth Books is a small bookshop located in Kenilworth, England. Kenilworth is located in Warwickshire, about 6 miles from Coventry in the West Midlands. 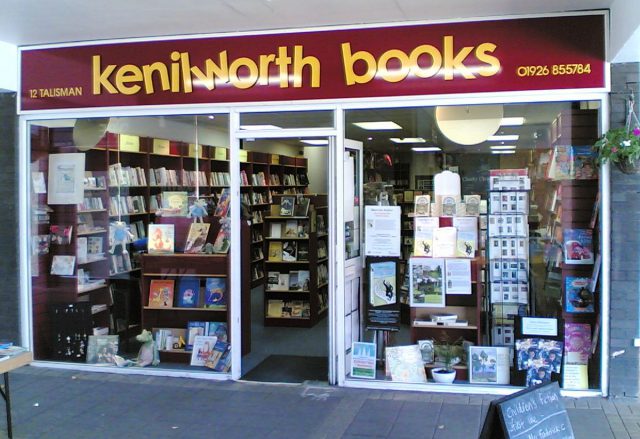 Neither the OP or the bookshop’s website identifies the author of this piece, but PG’s best guess is that the author is either an owner or manager of the bookshop.

In either case, PG found the OP to be quite insightful and well-written. Clearly, the author of the piece understands the book business very well and is familiar with the way authors are commonly treated by traditional publishers.

The gravamen of this article and the previous one PG posted from The Bookseller that appears immediately below is that publishers are killing their own industry by the way they treat authors and most booksellers.

A book industry comprised mainly of large publishers and Amazon is not a place in which publishers would find quiet lives.

On the one hand, Amazon pays indie authors much higher royalties than traditional publishers do. On the other hand, Amazon always wants to be the lowest-priced seller of goods, so the publishers’ margins will come under greatly-increased pressure.

If publishers’ short-sited pricing tactics squeeze physical bookstores out of the market, the publishers’ main advantage in the eyes of most traditionally-published authors – access to physical bookstores – will be gone. Barnes & Noble is teetering on the edge of collapse so, in the US, publishers won’t have any large customer who can purchase a wide range of physical books in large numbers other than Amazon.

PG suggests that, in early 2018, smart authors will keep as many options open as possible.

He further suggests that an author signing a traditional publishing contract:

And, of course, traditional publishing contracts are always subject to assignment and sale, so the dedicated and experienced book people working for the publisher who romance the author into signing the publishing contract won’t last long if the publisher is acquired by a venture or distressed property financial type. If an author thinks present-day royalty statements are difficult to understand, wait until she sees the statements the new owners create.

42 thoughts on “The Publishers and the Public – a psychological drama”