From The Financial Times:

The contemporary artist Luis Manuel Otero Alcântara was sitting peacefully on the steps of the El Capitolio building in Havana when the police came for him. Arrested ahead of a protest against a law that subjects all creative activity in Cuba to state approval, he cried out in pain as he was bundled into their car. I watched the shocking video footage in his apartment a few months later, in November last year. Two weeks later he was back in a cell along with his partner, curator Yanelys Nuñez Leyva, arrested on suspicion of planning another protest against Decree 349, as the law is officially known. Earlier this year I spoke to another redoubtable Cuban contemporary artist, Tania Bruguera, whose arrest in December was just her latest run-in with the authorities. In 2014-2015, she was detained repeatedly in the eight months after she tried to stage a performance, “Tatlin’s Whisper”, that asked citizens to speak freely into a microphone in Havana’s Revolution Square.

Her installation about the global refugee crisis graced the Turbine Hall of London’s Tate Modern this winter. “There is a moment when you understand you can lose everything,” she tells me at Tate when I ask about the strains of prison. “But my anger turns out to be bigger than my need for personal freedom.” These Cubans are part of a tide of artists enduring imprisonment around the world in recent years — a marked change from the 20th century, when writers were more at risk of persecution.

Art and politics are old bedfellows. Yet on the whole, the Old Masters took care not to bite the hands that fed them. Paolo Uccello’s magnificent “Battle of San Romano”, a set of three paintings to commemorate Florence’s conflict with Siena in 1432, polished the military reputation of his city so brightly that two of the panels were stolen by Lorenzo de’ Medici from their rightful owners. Nearly four centuries later, Francisco Goya embarked on a series of etchings, “Disasters of War”, that revealed the horrors inflicted on civilians and soldiers during the 1808-14 conflict between France and Spain. He was described by his biographer Robert Hughes as one of the “true ancestors of war reporting” — though the etchings were never published during Goya’s lifetime.

Increased politicisation is only part of the story. Ivor Stodolsky, who set up AR along with fellow curator Marita Muukkonen in 2013 to provide residencies for visual artists at risk of persecution in their homelands, suggests that the new threat to artists stems ultimately from the growing power of the media in which they work. “The 21st century is a visual culture,” he says. “It’s beginning to be our dominant form.”

Stodolsky believes that one of the reasons artists are in trouble is because “today, visual art is about more than just visuals”. Indeed, the art world is an increasingly cross-disciplinary landscape. Once the province of painting and sculpture, it now encompasses photography, film, sound and performance.

Link to the rest at The Financial Times

Here is one of Mr. Alcântara’s works 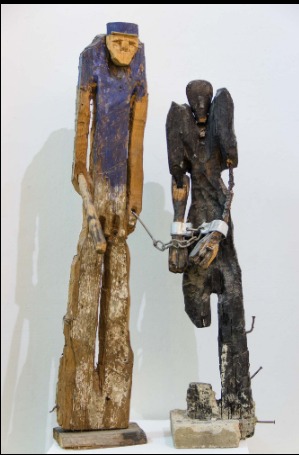 And a video by several Cuban artists.

20 thoughts on “Why More Artists Face Jail Around the World”

Scroll back to top Secured By miniOrange